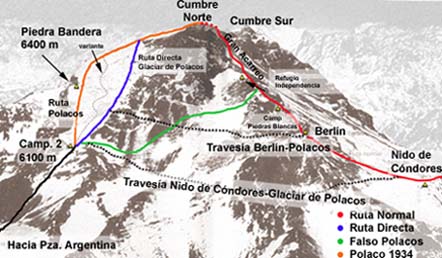 We decided to take the Plaza Argentina approach and from there up to the camp below the Polish Glacier (black line). Then we take the traverse (green) to the right to join the Normal Route at 6200 meters. From there it is the Normal Route (red) which takes us over the infamous Canaleta to the summit.

In high season 2004 the permits were $300 per person. They can only be obtained at the Visitor’s Attention Centre, General San Martín ParkOffice hours Monday until Friday, 08:00-18:00, Saturday and Sunday 09:00-13:00. Closed at Christmas and New Years day.

De Climbing Permit is valid for 20 days, starting the moment you enter the Aconcagua park. You have to pay in US dollars or pesos. Only a passport is needed. Quick procedure.

In 1990 a Park Ranger Service started. They assist climbers and act as a kind of police. They are based in Horcones and there are posts in Confluencia, Plaza de Mulas, Pampa de Leñas and Plaza Argentina. They have modern communications equipment.

Maps is a bit of a problem. Of course there is the infamous old map where Aconcagua is on the intersection of four maps. You will need all four and they cost $20 each.

There is also this book/map called: Aconcagua: Summit of the Americas -- A Map-Guide for Climbers and Trekkers, ISBN 1884980821. It comprises:

These maps can be rather easily obtained at your local bookstores out outdoors shops.

However in Mendoza we found a couple of other maps.

Aconcagua – El Mapa.
This is the first release of this map with information in both Spanish and English. It is the most accurate topographic map (1:100,000) we found. Besides the map there is a list of waypoints, photographs of the routes and a map of Mendoza. Information can be obtained by aconcaguaelmapa@hotmail.com. The map is available in outdoor shops in Mendoza. See a sample.

Aconcagua – The America’s Challenge.
This is also a 1:100,000 map, but less accurate. For instance the river crossing are wrongly situated. However it is a useful map because it shows the mountains left and right of the trail as well. There is a separate 1:50,000 map of the summit area as well as a 1:30,000 photograph. You can buy it at the Orviz outdoor store.

Mules can be rented everywhere. We decided to use Rudy Parra. He is very relaxed. All payments can be done afterwards when you have returned from Aconcagua. He owns a camp site near Puente del Inca called Los Puquios. If you arrive from Santiago you can leave your equipment here and travel on to Mendoza (for the permits etc.).
A mule can carry 60 kgms max. When going to base camp you have two options:

The three of us took two mules up and we carried the sleeping gear ourselves. The two mules carried 90 kgms, inclusive 15 liters fuel. And back we had two mules as well, but now they carried our sleeping stuff as well.

Water can be easily found on the approach. The first campsite, Pampa de Leñas, has fresh water that comes from an up mountain stream. It is not contaminated. The second campsite, Casa de Piedra, has very few water. However there is this little stream just above the campsite.

In base camp Plaza Argentina there is ample water, however the water is very sandy, it is brownish. Look carefully and try to find a spot that has clear water. We managed to find one in the middle of the river on a sand bed. We were one of the few in base camp to have clear water!

Camp 1 has a small stream with uncontaminated water. In camp two the water will be frozen. In Col Camp you can find a small snowfield. And sometimes there is a little water on the side of this field.

It is advisable to boil water anytime. It is the only way to kill all contamination. You will not need any water filters if you boil it. 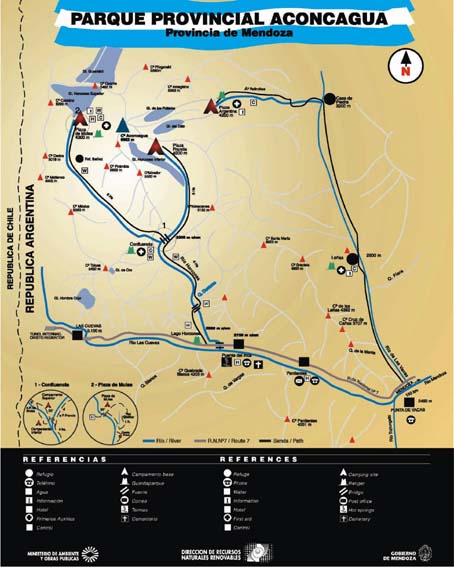 The plan was to take the Plaza Argentina approach and from there up to the camp below the Polish Glacier. From there on we would take the traverse to the Normal Route and the up to the summit.
Click on the map for an enlargement.

The Polish Traverse Route climbs from Plaza Argentina to the base of the Polish Glacier. From there on it turns right to the Normal Route. It merges with the Normal Route a little under Refugio Independencia. Camps can be established at:

Most groups skip CC. What they sometimes do is carry loads from C1 to C2 en thereafter rest an extra day in C1. And then they move up to C2.

Most of the times C2 is being used as high camp. From there it is one long day to the summit and back.

However if you use the high camp of 6200 m, then you can rise at 5 in the morning instead of 2 o’clock. This is less cold and the trip is shorter. The con is that you probably do not sleep very well or at all at this altitude.

This was our plan for the approach and climb.

As usual plan and realization were quite different. The approach was as planned, although it took us more time than estimated. During our acclimatization and approach we decided to change plans with respect to carrying loads to the different camps. We decided that it was no fun to carry 25-30 kgms on your back. So instead of the method ‘carry on day 1 – move on day 2’ we developed another method. Many groups we met during the climb approved of our method!

Our new method was:

This would result in less weight (about 23 kgms) and only loss of one day.

Furthermore we decided to use C2 as our high camp. We learned that there would be no water at our planned high camp. Hereby we would gain 2 days.

And of course, what we have really done differed from our revised plan.

On day 8 Otto decided to go back. Marja joined him and so Antonio was on his own. He was not really alone because there were around 20-30 climbers in camp 1, all going up. Because Antonio was very quick and very strong and because bad weather was expected within the next 3 or 4 days, we revised our plan again.

So instead of the original 18 days it only took 13 days.

Waypoints for the GPS receiver

We brought a GPS receiver: the Magellan SportTrak Color. We have found numerous websites having waypoints. And of course we have entered our own waypoints. I use the freeware program EasyGPS. I created 1 GPX file (download with save as GPX file)  for the Polish Traverse Route.