For Europeans visa are not needed. You’ll only need a passport valid for another 6 months after your planned exit.

The peso (ARS) is the currency unit in Argentina. A few years ago the peso was linked to the US dollar (1:1). But now it is more like 3 pesos to 1 dollar. The good news is that most guidebooks (such as Lonely Planet) state their prices in USD. If the guidebook is over 2 years old it means that the price is now a peso price! So a hotel of 20 dollars is now 20 pesos, or a bit more (inflation).

Note that in Argentina the peso sign is $. Prices in USD are written U$S.
Chile has another peso: roughly it is 1000 pesos to 1.35 Euro.

Everywhere in Argentina and Chile there are ATMs. So there is really no need to bring travellers cheques of cash. Most ATMs give you the choice between pesos and US dollars.
Be aware that dollar notes have to be in pristine condition or locals may refuse them.

A mid-range hotel would typically cost around 50-70 pesos in Argentina. That is per 2-bed room. Here are two hotels we used:

We booked our flights in March already! Because we had to travel in the end-of-the year period it was very hard to find an affordable flight. Iberia proved to be the best. We had an open jaw to Santiago de Chile and back from Buenos Aires. From Santiago you can either take a short flight to Mendoza or take a bus or taxi. We opted for road transport.

Do not forget to reconfirm the flight back 3 days before departure. Go to an official office of the carrier.

Since excess baggage can be very expensive (almost as much as the ticket itself) we checked other options. A good one in The Netherlands is the Worldwide Baggage Services.  They transport to both Chile and Argentina. Single fare up to 45 kg is €227 for Chile and €210 for Argentina, no insurance. If you want to have it insured up to €5000 an extra €112 is added. They use carriers like Martinair and Alitalia.

However we were lucky. Our tickets used the Piece Concept (PC). However as far as I know this system does not exist anymore by now.
We were all allowed to bring 2 pieces of 32 kg each! This is an extract of the Iberia website.

Road transport in Chile and Argentina

Mendoza has good connections with both Santiago and Buenos Aires.

In Santiago there are a lot of bus companies that offer connections to Mendoza, such as:

Since we had a lot of luggage (3 duffels of 30 kg each and 3 backpacks of 25 kg each) we opted for one mini-bus for ourselves. The day of arrival in Santiago we went to the bus station and hired a van for ourselves for the next day. It costed USD 210 at Coitram. The advantages are:

Travel in Argentina is very well organised. Buses are all comfortable. Some companies now have very luxury coaches for long distance. They are called coche cama (bed bus). It is like business class in an airplane. There is even coche cama suite, comparable to first class in an aircraft.

As a rule of thumb you can say that a regular long distance bus would cost one US dollar per hour. A 15-hour journey would cost around 15 bucks. But this trip could cost as much as 35 dollars if you take the coche cama suite. But then you get your free whiskey and supper.

Some bus companies that operate between Mendoza and Buenos Aires:

For going to Puente del Inca (start of the hikes to base camps) from Mendoza you’ll have to take the Expresso Uspallata line. It takes three and a half hours. 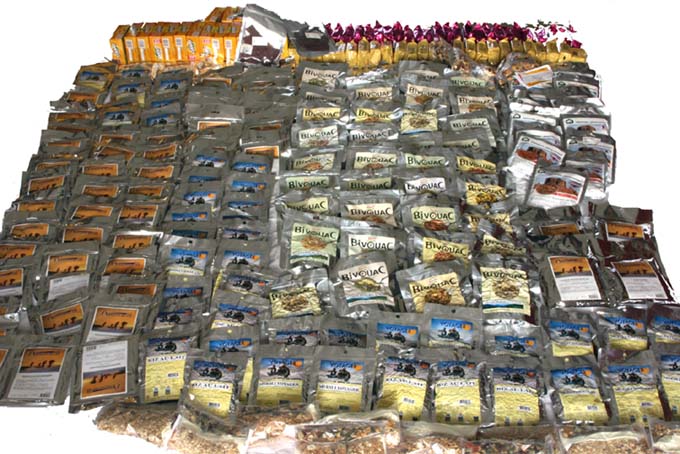 Our worst-case scenario was that we would need 26 days, 6 days for acclimatization and 20 for the climb. That is why we bought food for 26 days in total. It was all dehydrated meals, which we got from outdoor shops. In the Netherlands the offering was quite limited, so we bought it partly at Au Vieux Campeur in Paris. They sold meals by Knorr that did not need a pan. Just pour boiling water in the bag, leave it for a couple of minutes, and eat!

For breakfast we had a so-called expedition breakfast or rice porridge. Lunch consisted of energy bars and diner consisted of three courses: soup, main course (pasta or rice) and desert (mousse au chocolat or pudding).

For breakfast and diner we bought in total (26 days, 3 persons):

Tip. Bring also some nuts, beef jerkies and other snacks you like.

We have done some research to find out what would be the best stove on altitude. We soon discovered that propane and butane stoves were not good on altitude. What we needed were gas stoves or multifuel stoves. In a Dutch magazine, called ‘Op Pad’ was an extensive test. Partly based on this test we decided to go for the MSR Dragonfly multifuel stove. The benefit of this stove is that the burning flame can be adjusted. It will burn anything, whether it is Coleman fuel or petrol. In Argentina they sell white gas, which is comparable to Coleman fuel. We estimated to need 5 liters per week for the three of us. However, it turned out to be only 3 liters per week.

For our Dutch audience we have scanned the pages of the ‘Op Pad’ test: